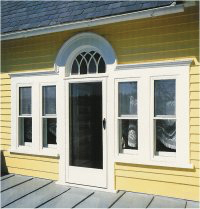 The uncommon combination of tubular aluminum extrusions, tongue and groove sash seal, and close tolerances between sash and frame make the VELV-A-LUME Storm Window a serious performer. As a result, VELV-A-LUME Storm Windows have been installed in many state, local, and federal projects, including office buildings, colleges, police barracks, highway department buildings, and hospitals, as well as veterans administration and military reservation facilities.

The preservation and renovation of homes and buildings of historic and architectural significance presents a singular challenge involving windows. Often, due to restrictions and guidelines enacted by localities, existing architectural details, such as windows, must be preserved. The VELV-A-LUME Storm Window has been used extensively in these situations. Designed to fit flush within the existing window opening, it's often difficult to detect that a storm window has been installed.

VELV-A-LUME Storm Windows are "butt construction," expander windows. An expander window is unique in that it can be fitted into a window opening that is out of square and still fit perfectly, always allowing the sash and frame to remain square and operate with ease. VELV-A-LUME... the ideal choice for "invisible" protection. 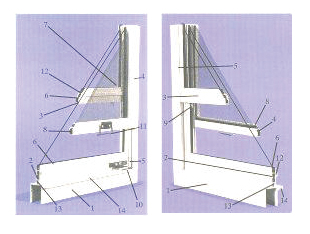 Corner section of main frame of storm window, showing both top and bottom sash and screen, each in separate tracks. (Note: all screen rails and bottom of both insert rails are tubular extrusions to assure more strength and rigidity.) (Pictured Left)
Both sash are glazed with wrap-around vinyl for easier repair and strength. Special corners are used to eliminate dimples and staking marks. (Pictured Right) 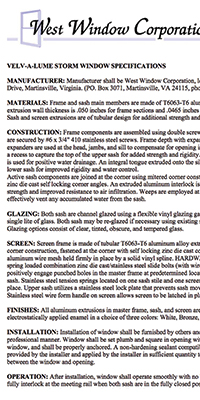